utf8 Turning a car into a hybrid-solar vehicle

Turning a car into a hybrid-solar vehicle 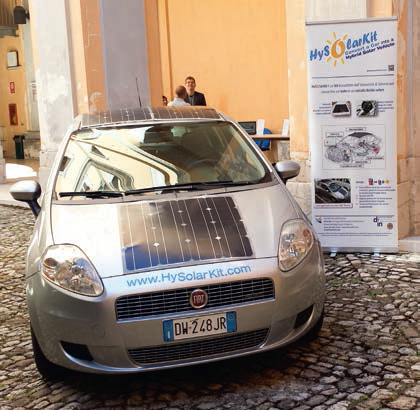 The project to transform a normal vehicle into a hybridsolar one, saving energy, money and cutting emissions is Italian and comes from Salerno. A working group of the University of Salerno, led by Gianfranco Rizzo, coordinator of the in mechanical and management engineering courses, has built the HySolarKit project: this will enable a Euro 3 vehicle to become a Euro 4, thus gaining access to the limited traffic zones. For those normally driving in cities, the savings can reach 20%, with an estimated cost of the kit of approximately three thousand euro. After some years of work, and thanks to a first financing by the Ministry of Education, a hybridization system for front wheel drive cars has been patented and implemented: it involves the insertion of electric motors on the rear wheels and an additional Lithium battery, which turns the car into a 4x4 hybrid. A cable plugged into the diagnostics port (Obd) is connected to the control system which controls the electric wheels. “The system – explains Rizzo - does not require any additional sensors, has no impact on the driving style and does not touch the original control unit, which could result in the loss of the guarantee”. The integration with the photovoltaic happens via high-performance, flexible panels covering the hood and the roof; these are produced by the Italian brand Enecom. This way, the vehicle can operate in either electric or hybrid mode, preserving in this case the autonomy and performance of the original vehicle: indeed, with a plus in acceleration provided by the electric motors, and with an advanced control of the vehicle thanks to the four-wheel drive. The auxiliary battery can be recharged both by the rear wheels (regenerative braking) and by the solar panels, which can provide more than 1 kWh per day. The realization of the first prototype, mounted on a Fiat Punto, showed no special criticality of operation. The spin-off eProInn Srl was founded to successfully present this project to the phase 1 of the Horizon 2020 program (Sme Instrument). The proposal enjoys the advice of CiaoTech, the collaboration of Actua, a spin-off of the Politecnico di Torino holding a patent for integrating the engine to the electric disc brake, by Landi Renzo, a leading manufacturer of Cng and Lpg systems, working to a hybridization project (Hers) complementary with HySolarKit, and the interest of Chinese and Maltese investors. Preliminary market research showed a good attitude of the potential users to purchase the kit and the integration with the photovoltaic. The Salerno researchers presented their studies in numerous international forums and received several awards. Rizzo  is also one of the promoters of the “Mobidic - Digital Mobility Center” project, an initiative for the establishment of a high-technology industrial center on sustainable mobility in Campania.  -G.R.- 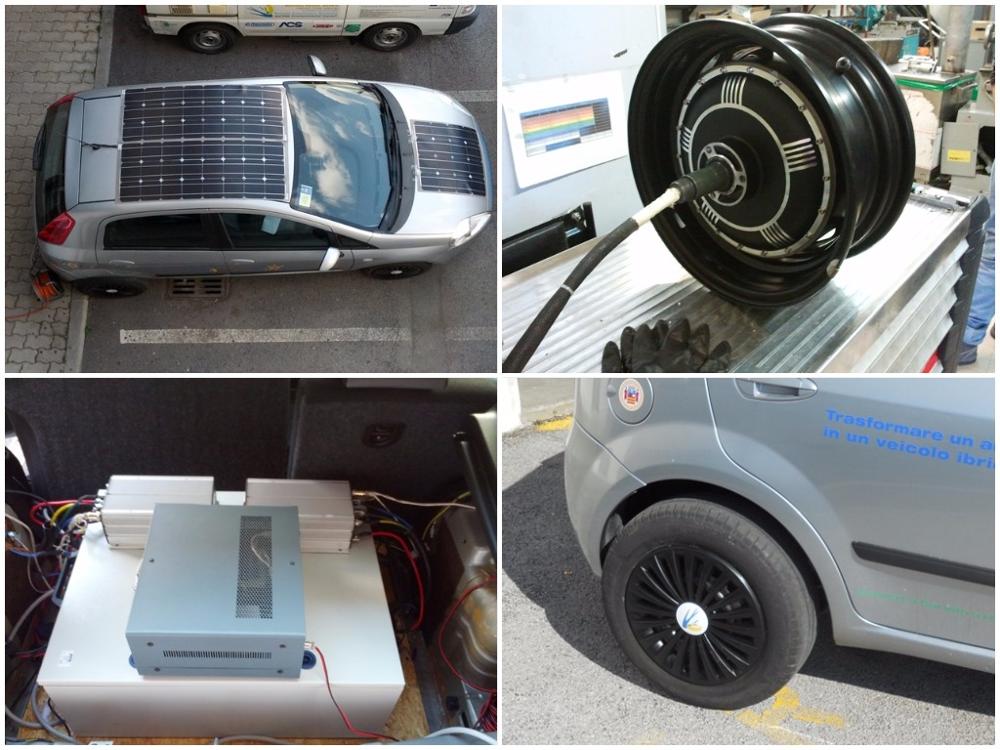 This patent focuses on the development of equipments, along with associated techniques and methodologies, aimed at converting conventional car into hybrid solar vehicles (Mild-Solar-Hybrid). Mild-hybridization will be performed by installing inwheel electric motors on the rear wheels (in case of front wheel drive) and by the integration of photovoltaic panels on the roof. The original architecture will be upgraded with the storage device (battery pack) and an additional control unit to be faced with the engine management system by the OBD port, and not interfering with the original engine control unit.

The proposed hybridizing equipment for conventional cars will impact both fuel consumption and related CO2 emissions. Moreover, it will have a significant impact also from an economical point of view, as explained in the following:

• it is worldwide accepted within the industrial and academic research communities that the most promising technology for a real, short-term and significant reduction of fuel consumption and CO2 emissions is represented by hybrid electric vehicles;

• the integration of hybrid vehicles with the solar energy, through on-board photovoltaic panels, can provide an important contribution to reducing both fuel consumption and emissions: during sunny days, photovoltaic energy can contribute up to 30-40% of the overall energy requested for vehicle traction, when vehicles are used for approximately one or two hours per day in urban areas (some recent statistics confirm that the majority of car users do not drive for longer time);

• despite their unambiguous benefits from both environmental and energetic point of views, hybrid vehicles, though largely present in the international market, do not have yet gained sufficient appealing for the customers, thus this technology has not yet been able to produce a significant impact on fuel consumption and CO2 emission reduction; hybrid solar vehicles are currently produced only as prototypes (the authors themselves developed a prototype of such vehicle type within an EU-funded project: www.dimec.unisa.it/Leonardo) and their real impact into the market can be fairly evaluated only on a medium-term time;

• several recent studies on Mild-Hybrid show that, by means of a suitable design, such vehicles can provide also better energetic efficiency with respect to full-hybrid solutions (e.g. Toyota Prius), mainly for cars moving in urban areas and for short-distance transfers;

• photovoltaic costs are constantly decreasing, whereas, thanks to the continuous research efforts, electrical efficiencies are growing;

• energy density, costs and size of batteries are under continuous improvement, due to the key role played by such devices in both hybrid and electric vehicles;

• The market of in-wheel motors is currently growing thanks to the technological tie with hybrid as well as special vehicles;

• the possibility to have as set of equipments, and in perspective also an after-market kit, able to transform a traditional vehicle into a mild-solar-hybrid will ensure a relevant impact on the general energetic consumption, because of the large number of cars present on that segment; moreover such result can be achieved without introducing expensive modifications on the cars production lines and without the substitutions of cars already circulating on the roads, the latter aspect being of particular relevance with respect to the current worldwide economical crisis. Although the main benefits are related to the energetic/environmental field, the following further improvements could reasonably be attained through car hybridization:

• by using the fast dynamic start-up of the electric motors, it is possible to obtain good acceleration performance for the vehicle, also in the urban traffic;

• the reliability of the vehicle is increased in different scenarios, e.g. in the presence of faults of one of the propulsion sources and for possible fuel exhaustion;

• opportunity of collecting data to monitor real-world performance of engine and vehicle, thus enabling the adoption of predictive maintenance strategies.

How does it work 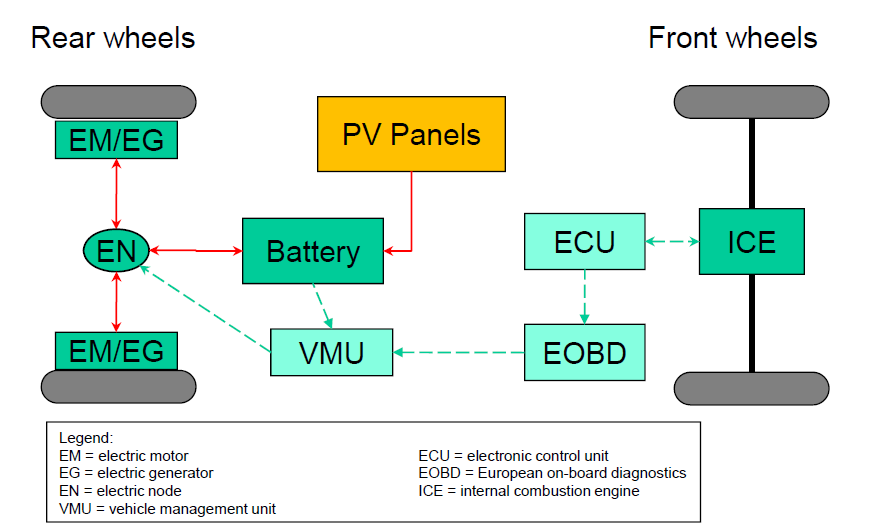 The above figure shows a block diagram of the mild hybrid solar vehicle. The hybridizing equipment is installed on a conventional car (two front wheels drive), in which the front wheels are propelled by the Internal Combustion Engine (ICE) controlled by an Engine Control Unit (ECU). The vehicle is also equipped with an EOBD gate (On Board Diagnostics protocol), which allows accessing data such as pedal position, vehicle speed, engine speed, manifold pressure and other variables. A mild parallel hybrid structure is obtained by substituting/integrating the rear wheels with in-wheel motors. In that way, the vehicle can operate in pure electric mode (when ICE is switched off or disconnected by the front wheels) or in hybrid mode (when the ICE drives the front wheels and the rear in-wheel motors operate in traction mode or in generation mode, corresponding to a positive or negative torque). The battery can be recharged both by rear wheels, when operating in generation mode, and by photovoltaic panels. The Vehicle Management Unit (VMU), which is part of the invention and implements control logics compatible with typical drive styles of conventional-car users, receives the data from EOBD gate, from battery (SOC estimation) and drives in-wheel motors by properly acting on the electric node EN. A display on the dashboard may advice the driver about the actual operation of the system.

The kit of equipments, to be installed for converting a conventional car into a hybrid solar vehicle, will include:

A. A couple of in-wheel motors, which can be purchased (they are currently commercialized by Michelin and other manufacturers) and eventually modified according to system requirements.

B. An auxiliary battery pack, presumably consisting of Lithium-Ion cells.

C. An additional control system (VMU), which is conceived to be self-adaptive enough to be suitable for different vehicle

and in-wheel typologies and features.

D. A connector for the OBD gate along with related cables, to be connected to the VMU.

E. Either a flexible or semi-rigid solar panel, to be installed on vehicle roof.

F. Eventually, a small additional display to be placed on car instrument panel, which could include a state of charge

indicator for the auxiliary battery along with additional control buttons to switch from one operating mode to another .